I think there was a time that I was both of those things. I took a stand – I didn’t believe in being equivocal. “If you don’t stand for something, then you stand for nothing” was my motto. Everything had a right side and a wrong side and I didn’t really care much for people who couldn’t pick a side and then stick to it. Wishy-washy-ness just seemed like the creed of the follower, the person who didn’t have opinions of their own but could easily be swayed one way or another. It also seemed like intellectual laziness, too – I thought that if you just thought long enough about something, the right answer would come to you.

And then I had kids. I changed. But other folks with kids….they haven’t.

It’s amazing to me how childrearing has been happening for thousands of years but yet there still is no right answer. But instead of just accepting that, we keep fighting about it. We take stands every generation on something only to have that stand be overturned the next generation, and turned back the generation after that. This morning I saw a story on potty training, and how it was the newest front in the mommy wars. The story says that moms today are being pressured to potty train their kids “earlier and earlier,” but I know that older folks were telling me that back in the day kids were potty trained at two. So this “new” pressure isn’t really new; it’s just a generation gap, a old war that’s being recycled. 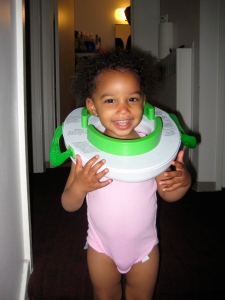 Little A way before the potty training bug bit her

Back then the stand was that no child wants to be potty trained – who wouldn’t prefer to pee and poop as you go, not stopping your daily activities, and have somebody else change you? Of course you need to go hard on the training. In the 50s, 90% of kids where potty trained by 2. Then the next generation came in and said – “Hey, wait! That’s emotional abuse! Let kids take their time, do it on their own time. They’ll be more successful, and you’ll save their psyche in the end too.” So 50 years later, by the 2000s, potty training wasn’t achieved until 3 and later. (And the diaper companies cheered.) Now, with more and more kids in day care and preschool, the centers are like – whoa….3-year-olds in diapers? If the child can say, “Change me!” then that child can go to the toilet! When parents start putting the hard work of toileting and diapering 30 pound children on somebody else, that somebody else is bound to start complaining.  It’s also some of the backlash against this child-centered parenting.

It’s telling how rigid some folks are on these issues. I’m happy to say that many of the conversations we’ve had on this blog have greatly impacted my own parenting. I am one of those people who used to be rigid in my beliefs, because I thought taking a stand meant something about me as a person. I still do. But now I think that being able to be flexible in one’s views – not wishy-washy, but being able to move, and stand, move and stand – is the better place to be. When we’ve argued about spanking, I’ve cut back on my spoon action a bit to contemplate what my other mamas have said. Our homeschooling discussions have really made me reconsider whether public schools can – and will – ever properly serve black children. I’m glad I’m out of the potty training phase with my kids – finally – but if we ever have another one, I’m sure I’ll deliberate about what approach to take given my experiences and the experiences of others – instead of being dogmatic about one way or another.

I still think its fascinating though: How can it be that after all this time, after all these children, that we are still learning – and fighting about – “what’s best?”

5 thoughts on “Move and Stand”