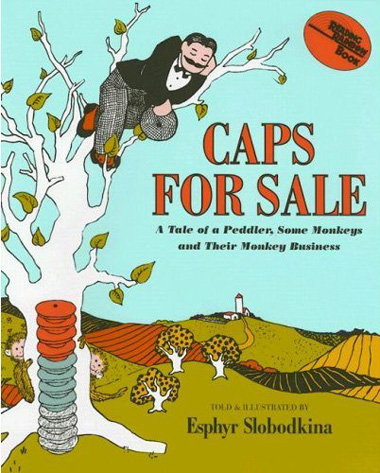 It started out innocently enough. But when they started reading Caps For Sale: A Tale of a Peddler, Some Monkeys and Their Monkey Business, my heart started to beat a little faster. A little boy was called up to be a “helper;” he played the part of the peddler. The peddler stacks felt pieces on his head: checkered, then gray, brown, blue, and finally red. He walks through town, and getting tired, stops to rest under a tree. He takes a nice long nap, only to awake and find only his checkered cap remains.

The children sitting on the circletime rug are spellbound. Stories being acted out are treats; usually the teacher is simply holding up a tiny little book that most of the kids cannot even see the pictures of. My two little ones are right in the middle; buttery brown faces waiting for the ball to drop – what happened to those caps?? My five year old calls out, for he’s heard the book before, “The monkey’s took them!,” a wide grin on his face.

The teacher assisting the reading teacher whispers, “Let’s give the kids the caps – they can be the monkeys.”

I’m sitting off to the side, taking pictures of this story-play. I stop.

My stomach flops and I feel like my lunch is about to come up. But of course – it’s a story play, and all the parts have to be there. If the kids – including my kids – were not going to be the monkeys, who were?

The reading teacher says, “No, I don’t have enough for all of them.” I exhale. “But they can all just act like monkeys in their seats.” My chest constricts again.

When I see my beautiful brown son put his fingertips in his armpits, and flap his elbows to mimic a monkey, I thought I would lose my breakfast. All the other teachers and parents in the room were giddy – their faces lit up, laughing, joyous – while all I could do is stare, steely eyed, trying my damnedest not to yank my children from their seats and rush out the door.

Afterwards, I approached the head teacher and told her that if they were going to read this book again, that under no uncertain terms were my children to be monkeys in from of the class. Even if they choose it themselves? Absolutely not. I walked away from the conversation sure that the teacher had gotten my point, but not quite sure that she understood why.

But I’m sure I was right. This was all the news this weekend:

An email reportedly sent by party central committee member Marilyn Davenport shows an image, posed like a family portrait, of chimpanzee parents and child, with Obama’s face artificially superimposed on the child. Text beneath the photo reads, “Now you know why no birth certificate.” 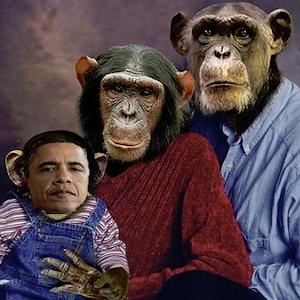 “I simply found it amusing regarding the character of Obama and all the questions surrounding his origin of birth,” Davenport wrote, according to the paper’s website. “In no way did I even consider the fact he’s half black when I sent out the email. In fact, the thought never entered my mind until one or two other people tried to make this about race. . .”

Tried to make it about race? Hmm. Right. Blacks have been compared to apes damn since the beginning of time; claiming ignorance about the connection makes one seem stupid, not colorblind. Even the head of the GOP saw the racism for what it was. Even so, read the newspaper online comments and people continue to defend her actions, saying that race had nothing to do with it, and this was simply a joke.

But why THIS joke, why this imagery over and over again? Type in “obama and ape” on google and see how many pictures come up, how many “innocent jokes” are associated with this rhetoric.  How can whites claim that they know nothing of the imagery associated with blacks and apes, chimps, monkeys, etc, yet use it so often to ridicule and dehumanize black folk?

5 thoughts on “no more monkeys”